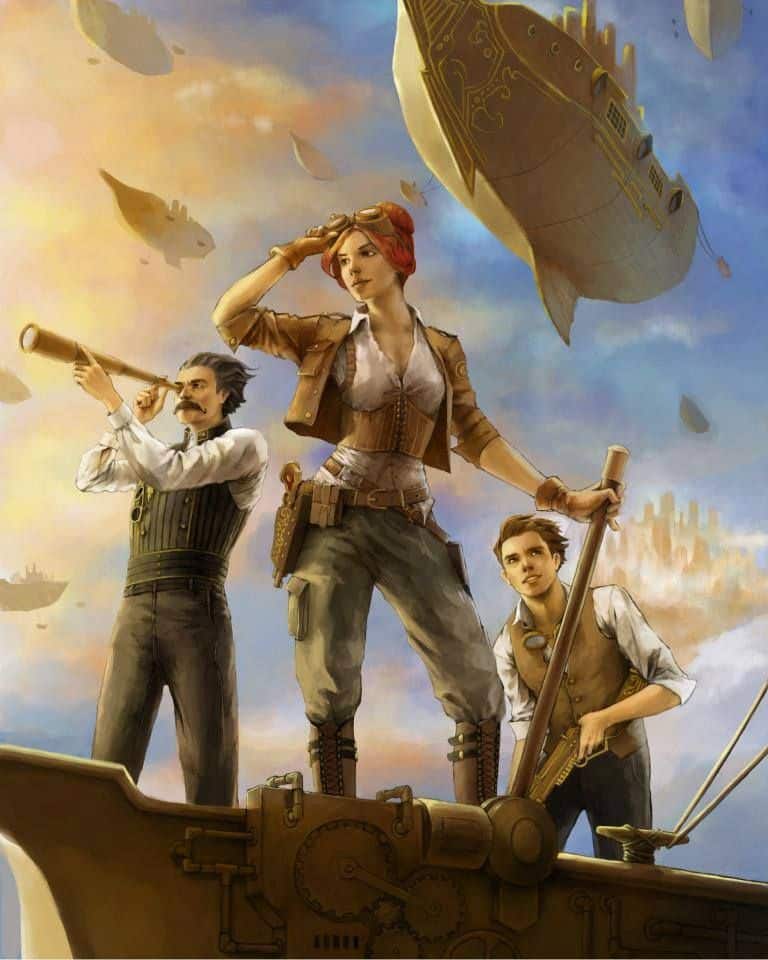 The Story: The game is set in a Steampunk world, an alternate version of the Victorian Era (late 1800s), where steam-powered technology runs society. Players will take on the roles of an Airship crew, who sail the skies together in their steam-powered flying machine. You all work as an Airship-for-Hire company: taking jobs such as ferrying passengers, making deliveries, or going on scavenging expeditions.

For your latest job, you've all been hired to make a simple delivery, the kind of job you do all the time. However, as you flew over the open seas with your Airship, a freak storm blew you way off course, and you crashed your ship on an uncharted island. Your captain did not survive the crash; it will be up to you, the remaining crew, to escape from this dangerous place, an island filled with traps, hazards, treasures, mysteries, and monsters.

Now, you must all fight for your survival as you journey across the mysterious isle to locate all of the missing pieces of your Airship that fell off in the storm, and are now scattered across the landscape. Armed only with your wits and what little gear you have on the Airship to aid you in your journey.

Solve puzzles, uncover secrets, find helpful equipment or treasures, unlock new skills, and defend yourself against the horrors of this strange place! Will you and your crew escape from Mystery Island?

Style of Play: Very simple rules that focus mostly on d20 and d6 rolls, with minimal statistics. A fast-paced adventure story with lots of action, mystery, and suspense. Inspired by Indiana Jones, Tomb Raider, and a whole variety of fantasy influences.

Custom rules based on D&D

Player Preparation: Minimal player preparation needed. We will spend the first session creating our characters together, based on rules of my own creation. Each player will take on a unique role in the crew (for example: Navigator, Mechanic, etc.) and we will select everyone's roles, and pick our skills and abilities all together during the first session. We will be assigning roles based on a draft system, so everyone will need to be flexible and open to whatever options they are given.

Don't worry -- every single role is equally fun and interesting, but they just all have different abilities that make them distinct.

Players will be able to customize their characters as they progress through the game, being able to choose between a variety of equipment, skills and abilities as we play. I will send basic info about the game rules leading up to the first session, for any players who want to get familiar with some of the rules beforehand. I will send players all necessary info on how to register for roll20, and any other technical preparation they will need.

*MICROPHONES ARE REQUIRED!* We will be communicating over voice chat for this game, and it will be impossible to play cohesively without everyone being able to hear and speak directly with one another.

About the GM: Marc Berg is a seasoned Game Master with over a decade of experience running tabletop games such as Pathfinder and D&D. He’s recently started running games for AiC this spring! He likes to run games that reward cooperation, creativity, and curiosity.