Power: While carried, the wielder may use only 1 arm of equipment. If held by two users, it can be activated 3 times per game to force all non-team members off a trail as far as the eye can see and gives the using team a 15 second window to move freely on the trail. Those off the trail cannot attack those on the trail, and vice versa.

No one know why, how or who made the spear. To most, it looks like nothing more than sticks held by twine with a rusty hook at the end, but for those in Sanglier, they know right where to stick it. 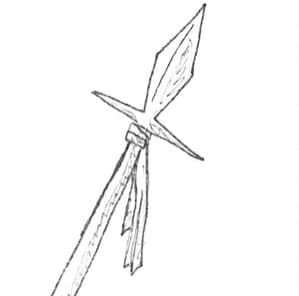