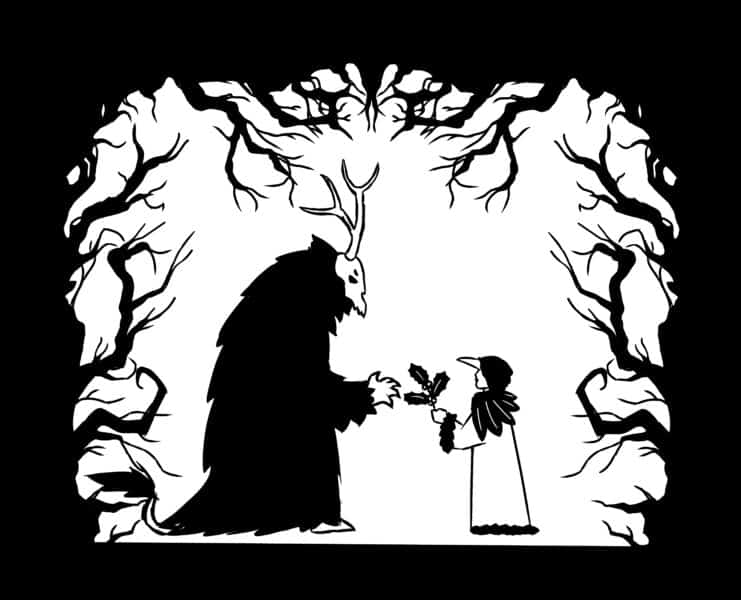 Mystery of the First Night

Long ago the ancient land of Faerie was engulfed in a world-changing war between the Elven courts. In the end, the High Elven Court triumphed over Wood and Deep Elf, and the despotic Empire of Caer Sidi came to rule unchallenged for centuries.

At that time humankind were new arrivals to Faerie, and those human beings, or Hidzi as the Elves called them, who had taken up arms against the High Elves were caught and given a slow death before the Emperor and his jeering court. However, there was a band of Hidzi who had not taken up arms against Caer Sidi yet were sheltered from the conflict by their Deep Elven friends in that fight. When the Deep Elven court was driven into caverns under the earth or slaughtered, their Hidzi friends were left alone before merciless Caer Sidi.

The Emperor caught these Hidzi wretches cowering and they begged him for his mercy. Having none, the Emperor condemned them to be cast into the Wild Valley for his sport and pleasure. Now it was known by all in that ancient age that any speaking being who dared to tarry in the Wild Valley would be hunted and eaten by the Wild One himself and his wild entourage. The Emperor had rings of copper wrought hot about the necks of his captives, scorching them and thereby laying a curse on them that would bind them to the Valley once he cast them into it.

Assembled in chains on a steep mountain trail above the Valley, the Emperor mocked these Hidzi as Hirchi, or ‘frightend hares.’ The Elvish nobles in splendor laughed above these ring-necked wretches and they snarled and snapped their naked bowstrings as if hunting them. “Ye Hirchi will be hunted and eaten as the frightened little hares you are. Ah, but ye may live a bit longer, no? Aren’t hares able to dig holes to hide themselves in?” Roaring with laughter, the Emporer had his frighteneed hares kicked off a steep trail and they rolled down the rocky slope of Sazardun into the Wild Valley.

In the Wild Valley the Hares lived in wretched misery, constantly on the move, constantly on the watch. And as the Emperor had promised, they were hunted mercilessly by the howling Wild One, destroyer of civilization. The Hares watched many of their own family torn limb from limb or eaten alive by the Wild One’s beastly entourage, the Gwyllion. The rings from their necks made nice trophies for these hunters: as bloody bracelets, as bangles, as earrings, nose rings or worse. And as the numbers of the Hares dwindled, from their wretched holes they begged the gods for mercy.

Mystery of the Second Night

She was born Mabonegedd, daughter of Gogma the Sun, and in her youth she completed making the Blanket of the Year  with her sister, Shadow of Spring, by stitching the pattern of Fall into the tapestry of life. Her throne is deep in the Siddi Mountains, in a hidden patchwork of forest glades that are ever-in-Autumn.

After the war, the Emperor burned many of her glades as he routed bands of rebel Wood Elves encamped there. But long after the Wood Elves were gone, she caught many a High Elven knight passing through her land and tore off half of each of their faces, making terrifying masks to keep them out for good. These gauled and humiliated the Emperor.

In time the Emporer caught her using merciless warriors and spears dipped in a stupefying poison from the depths of a sea she had never seen. They tarred and feathered her form to ensure she could be seen and dragged her to Caer Sidi. There they attempted to slay the Shadow in three ways at once: burned upside-down at the stake, drowned with her head thrust below the pyre platform in a bucket of filthy water, and pierced by thirty-three spears. Yet the Shadow’s voice came through the water, smoke and agony, even as her mortal shell was destroyed.

“As thou hast burned my trees, Elf, thou burneth me! And as thou burneth me, yea, so shall thee and all thy kind be burned by what thou loveth most and yet has disfigured thee! So it is! So mote it be!”

In that instant there was a shout of pain among the assembled Elven nobles, and from their pockets and from their armor issued the stinking smoke of singed flesh. Ever after, High Elven kind were burned by the copper that had given them so much might over the lands of Faerie.

As Mabonegedd’s mortal form turned to ash and blew west into the Wild Valley, the shadow of a raven flew out of the smoldering pyre and into the heavens. Flying fast, it caught up with its mother, the sun, as she was chasing the moon about the lands of Faerie. Mabonegedd was taken in and re-born by Gogma in a suit of mortal feathers. But the Sun had no time to be a mother again and so teh little raven fell all the way back to Faerie, landing hard in the Wild Valley.

Her tiny, feathered frame was found by a child of the Hares who nursed her back to health, though her elders bade her leave it as they ran from hole to hole. During that time the little raven witnessed the misery of the Hares and was moved. And in the shadow of an autumn twilight she flew out of the hands of the girl and west into the Na Féauns.

“Not that way!” the girl cried, thinking the raven was now free only to be caught and eaten like her family.

In the dark and gloomy Na Féauns the raven spent a month and a half as a guest of the Wild One in his wild realm and with his wild entourage. The Wild One knew of the birth of she and her sister, ages ago before the coming of speech. He enjoyed hearing about all she had done. He laughed at her mask-making with the High Elves. He felt great empathy for her pain at the hands of the emperor. And he almost felt a pang of forgiveness for the hated speaking ones who helped her back to health. And so, he agreed to a pact that would allow the ones who saved her to stay in the Valley.

The little bird returned to the girl and her people just before the darkest day of the year with a holly branch in her mouth. And she startled all by speaking!

“I have spent one month and half-one-more with the Wild One, and I have made a bargain with him that no other being could have made. It is a bargain on behalf of your people.” She tucked the holly branch into the girl’s fingers with her beak and continued speaking from the top of the eldest Hare’s head. “If this girl’s people will renounce the civilized ways of their ancestors, yea, of all the other civilized peoples of Faerie, they may be permitted to wreath themselves in my power when the Wild One comes hunting them! Most of ye may yet live if ye take up hunting again under my shield. Ye may even find peace and in time, and perhaps plenty!”

Mystery of the Last Night

He is the Wild one of the Wood. His name is Wynathnud.

He was here when all was dark.

He was here when the Firstborn beings awoke.

From him all first beings, born before speech, learned the Law of Tooth and Claw.

In time the speakers awoke, and some say speech is simply the dream of fire.

The speakers leveled forests, capped mountains, and tore deep, even furrows into the wild, wild valleys. The firstborn ran for cover. But when the speaker began to tame the firstborn is when Wynathnud finally became majestically wroth.

He encased the entire world in ice and darkness for nine days and rallied the Gwyllion to be wardens of the last realm of Tooth and Claw. There would be no Beings of Speech ever to come and tarry in that Valley, or they would be hunted and devoured by he  and the Gwyllion.

After the great war of the Elves, a new kind of speaker entered Wynathnud’s valley. He hunted these frail beings relentlessly. They looked like elves, and spoke like them, but they were wretched and small. He did not understand why they would not leave; how could such meager creatures possess such pluck? He was as perplexed as he was enraged but his hunts were wild and bloody all the same.

In the Fall of that year when Wynathnud had killed more than half the Hares, a younger spirit, a raven, came to meet with him. She told the Wild One that these frail, wretched speaking creatures had the mettle to live with the Law of Tooth and Claw, and would give up many of the ways of their ancestors to live in the favor of the Absolute Wild.

Wynathnud said he would end his relentless hunt as long as the little things would summon the pluck to play a little hunting game with him each year at the darkest time of year. And they did.

Delighted by the sport and show the Hares gave him, the Wild One's joy radiates to this day throughout the valley and it is what makes the Torc Amret so brilliant, so mirthful, so plentiful… and at night so terrifying.