“Our kids wait for Adventures in Cardboard more than they wait for Christmas!”

“My son continues to talk about AIC, and it's clear that his week in Theo Wirth Park was the highlight not only of his summer but of his year and even perhaps of his 10 years on this earth. He will definitely be back next year!”

“Do you guys know how amazing you are?  I appreciate this camp experience so much for my children. The environment of creativity and acceptance is so special. My son had a rough year at school and this week has been magical (after only 2 days!!) He's happy and calmer than I've seen in over 9 months. So thank you!  Kindest Regards and Huzzah! (My kids tell me we must say this at least 4 times a day now).”

“My kids come home totally wiped out from all the awesomeness!”

“The BEST camp ever!! My boys loved all aspects of the camp - building weapons and castles, writing spells and incantations, playing capture the flag, searching for treasure (relics), and playing in the woods. The staff is engaged and supremely creative.”

“My son loves every minute of this camp and he's a hard kid to please (unless a screen is involved.) It's an amazing week that is unplugged and full of boyhood wonder!”

“My son LOVES this camp! According to him, it's the most fun he's ever had. We will definitely sign up again and for many years to come! So well organized and the camp leaders are amazing.”

“Hands down one of the best camps in the Twin Cities! Julian and his staff create a magical adventure full of fun and creativity! My daughter is already looking forward to camp next year and hopes to become a camp leader someday! I highly recommend this camp to children that love the outdoors, building castles, designing weapons and armor out of cardboard, theater and being creative. Great Job to all of the staff at Adventures in Cardboard! A special thanks to Zoe and Patrick! You have both been great role models and your love of all things glittery and your creative hearts have meant a lot to Riley!

Good luck to the House of Drake in the final battle!”

“My son had the best time attending this camp last week. In fact, he made it clear this was his favorite camp ever. He was so totally engaged - bringing his creations home at night and working feverishly to improve them. He practiced his 'epic deaths' and sword fighting techniques often. He was so happy and so energized by this camp - we'll certainly go again. Thanks for creating such a magical experience for kids!”

“This camp is a perennial favorite in our family for so many reasons. We love the fact that it takes place outdoors, it highlights medieval history, promotes creativity, theater and teamwork, and is just really fun.”

“My two boys just finished their first week and said this was the best camp they had ever attended. We loved that they allow the kids to roam around and be kids! The instructors are great and we are definitely coming back. Now they are home still working on their weapons and armor just because it’s fun! It's a great idea and I hope it continues to be successful forever!”

“Thank you, my son fully enjoyed the camp, saying it is the best camp he has ever attended!!!”

“You guys are doing an amazing job. I’m so impressed with your program and want to thank you for creating the most memorable week of Chase’s summer (this year and last). Chase can’t wait for next year (and we’ll try to sign up for two weeks this time!)”

We boast 1:5 staff-to-camper ratios, rare in any camp! 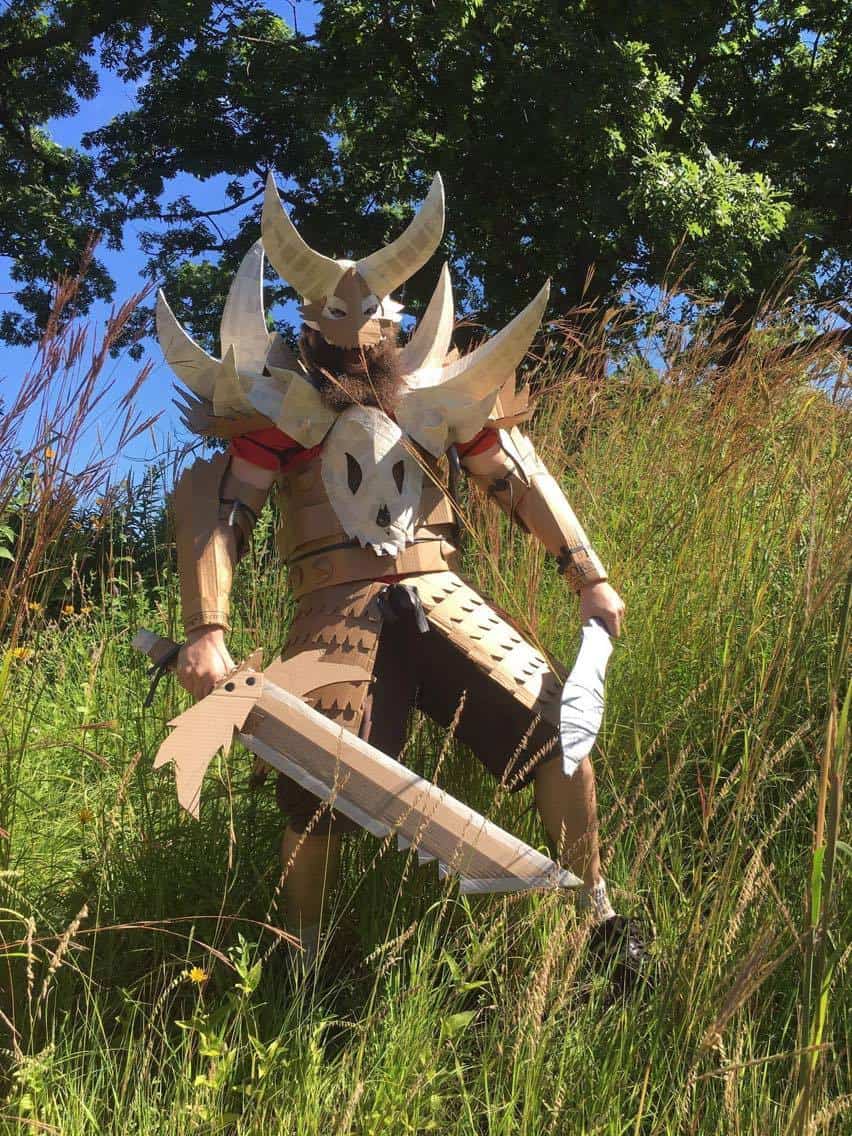 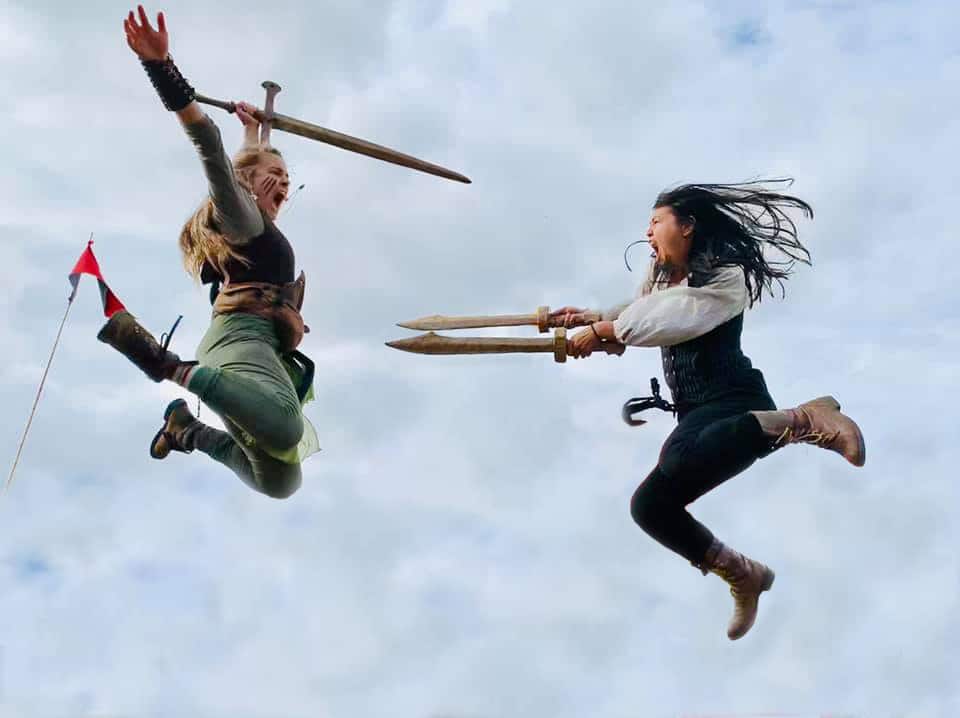 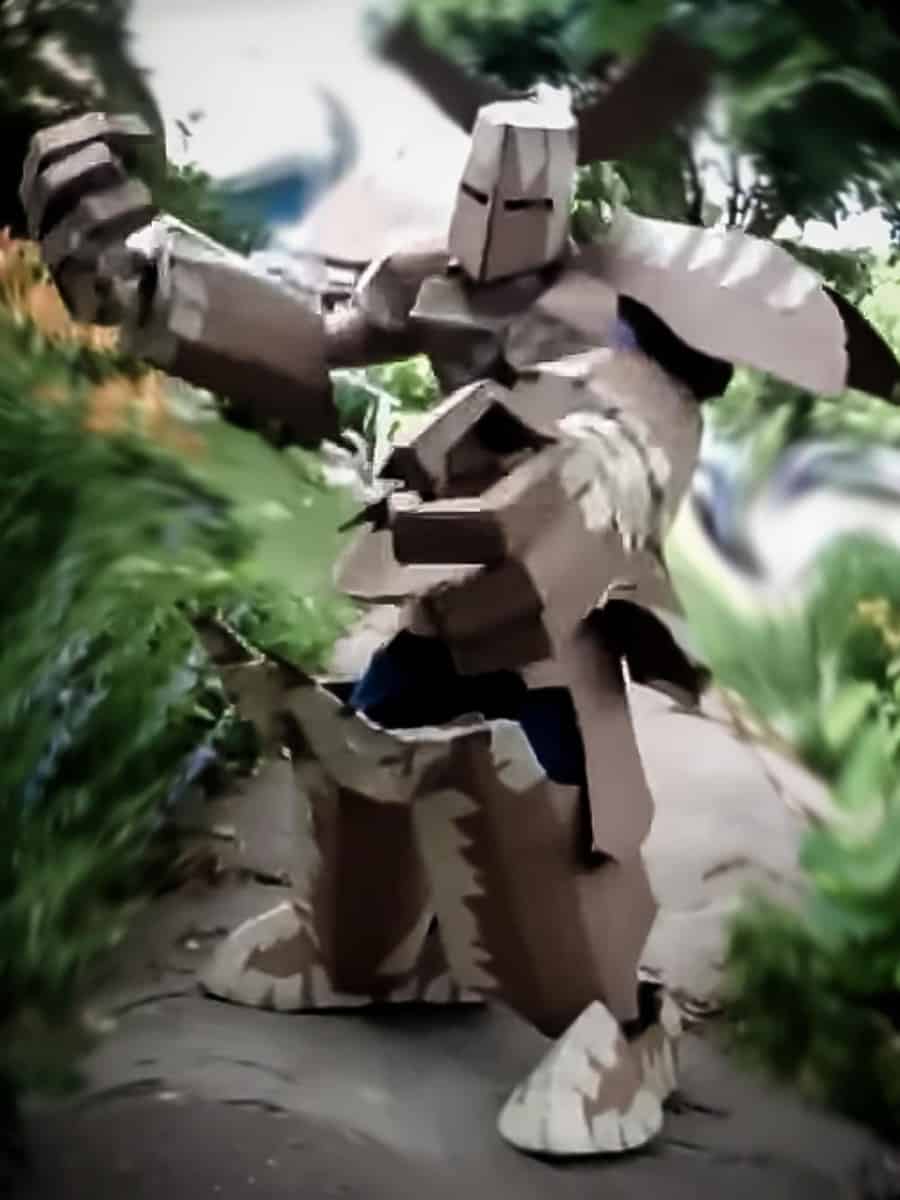 Step into a world of swords and sorcery, catapults and castles, mythical heroes and legendary beasts!

Be initiated into an ancient and esteemed House of The Realm and jump into live-action adventure gaming! Build your own arms and armor! Create your own culture and histories! Defend your lands from monsters and opposing Houses! Construct gigantic castles, labyrinths and fortified cities! Battle on trails, fields and shorelines as you seek out lost relics of power! Tell a hundred stories by your word and deed in the most enchanting, wooded and mystical parks across the metro region!

Adventures in Cardboard seeks to re-inspire creative outdoor play by immersing participants in fantastic worlds that they help to create.

Our camps are places that demand the use of legs and feet as much as hands and head, where artist-instructors seek to unleash a zeal for creative role-playing, and where “wonder” is the preferred path to igniting a passion for design, construction and playful exploration of the natural world.

Our mythical realm is a dangerous place, but our camps are safe places for all people, of all genders. Bring your reality into our open world and expand everyone's horizons!

AiC is for Girls and All Genders!

Adventures in Cardboard is for girls as much as boys. It is open to all people and all genders.
Our instructors are sensitive and skilled and they are trained to be aware of gender dynamics especially when it comes to combat play: an activity often tragically associated only with boys. But every week we see that battle games and tragic fantasy role playing is play that is enjoyed by people of all genders.
Unless adventurers instruct us otherwise, we always make sure there are several houses that are at least half-filled with girls and non-binary gender identifying individuals. This insures that all adventurers will:
Before summer cancellations we wer at about 35% girls having more than doubled their participation since 2014, but we know we can do much better. To that end we strive to build a culture and legacy of respect for all people at camp, but also especially for girls and non-binary genders who are sometimes under-represented in the domain of battle play and tragic fantasy. Every person at camp will find instructors that can be big sisters, big brothers and big siblings to them for the week; a large number of our instructors are women and people who identify as non-binary gender: all are skilled and capable artists, teachers, actors, coaches and martial artists of all ages.
Please let us know if we can answer any further questions for you about gender dynamics at camp.
No matter what pronouns you choose to go by, know that battle play and competition is only a part of the Adventures in Cardboard experience. You can avoid it entirely if you like and stick to role playing experiences. There are a plethora of cooperative and theatrical activities available and campers may participate in cooperative and/or competitive activities as they like!

Adventures in Cardboard is Adapting to the times

After cancelling our regularly-sized camps in May over concerns about COVID 19, Adventures in Cardboard has been able to run smaller alternative camps in June through the generosity of our community of friends and families. We cannot thank them enough for their support in this crisis.

​With all the world has learned about COVID 19 and its transmission in the last few months, we’ve been practicing how we’d need to operate smaller camps while encouraging new behaviors that reduce the risk of disease transmission. Our campers and staff adapted well and we are confident in our ability to run smaller camps in the full spirit of Adventures in Cardboard's open world of swashbuckling adventure while minimizing new risks.

For more information on how camps will be operating in the wake of COVID 19.

All weeks of Summer Adventure Camp 2020 include building arms & armor, playing extended games in the fields and trails and engaging in some free role play activities in and around whatever sprawling town or castle structures the group may be inspired to create. The terrain varies widely from park to park. Adventurers will have elective opportunities over the course of each week to customize their experience.

The Armory
Build anything you want for your character or your Esteemed House. Usually adventurers begin by designing their own suit of armor and personal arms: The Realm can be a dangerous place! Work independently or collaborate with a team. Add spikes, fins, scales, plates, helmets, gauntlets, shields limited only by your imagination. Go classic or go mythic. Create your heirloom sword, ax, mace, halberd, spear or other deadly accoutrements. Use and improve what you make in daily games of capture the flag.

Or... scrap the arms and armor and work instead on magical tomes, artifacts of power, hoods, capes, crowns, wands and rings of power!

Or... work on a farmstead and corral, a shop in the village, a tavern with games of chance, a forest hut for your sorcerer or a library for your wizened sage.

Each week will also have optional special projects with visiting local artists. Create a village, work on a giant maze, focus on siege engines, specialty bows or on more advanced live-action games.

The Games
Develop group identities and team strategies to defend or storm the castle in daily competitions of Capture the Flag and other games. Each site usually hosts plenty of paved paths for bicycle patrols, open fields for pitched battles, shoreline beaches for longboat raids and wooded trails for haunted towers and wizardry! Some sites have caves, gorges and other extraordinary features to explore. Always seek magic and unusual characters in such remarkable places when you stumble into them.

Adventurers are divided into six different houses each with its own set of virtues and weaknesses. Collaborate and compete in games that seek to instill integrity, chivalry, creativity and collaborative play. Each esteemed House has its own magic related to its unique eorð-sigil or déor-dweomer. Each House also possesses a complex backstory that you will develop and add to as your week progresses. Rumor has it there are secret Houses whose initiates have been sworn to deny their existence.

The Village
Design and build a village and towers to inhabit, employ your trade, to defend and attack. Make walls festooned with battlements. Raise towers. Install a gatehouse with portcullis, arrow-loops and drop-holes for defense. Add a blacksmith's, a tavern and inn, a stables, a thieve's den, a sacred temple, catacombs beneath the castle, anything goes!

Later in the week this sprawling village becomes the locus for many role playing activities. It's final size and the variety of activities that go on inside of its walls is up to our collective imagination. And for every person who manages to become Queen beware the Sword of Damocles that hangs above your head!

Peoples and History of The Realm

Aaron, Ramón, Faithann, Roger, Huyana, Henry and other favorite counselors of the famed Band of Storms!

Meg, Mikha, Lauren, Seamus, Dominic Laura and others of the Band of Mountains with Julian added Weeks 5-8!

Brett the Troll, Kevin, Taelyn, Henry & Charlie, Tyler, Erik Dagoberg, Abby and Bill and others of the famed Band of Iron. 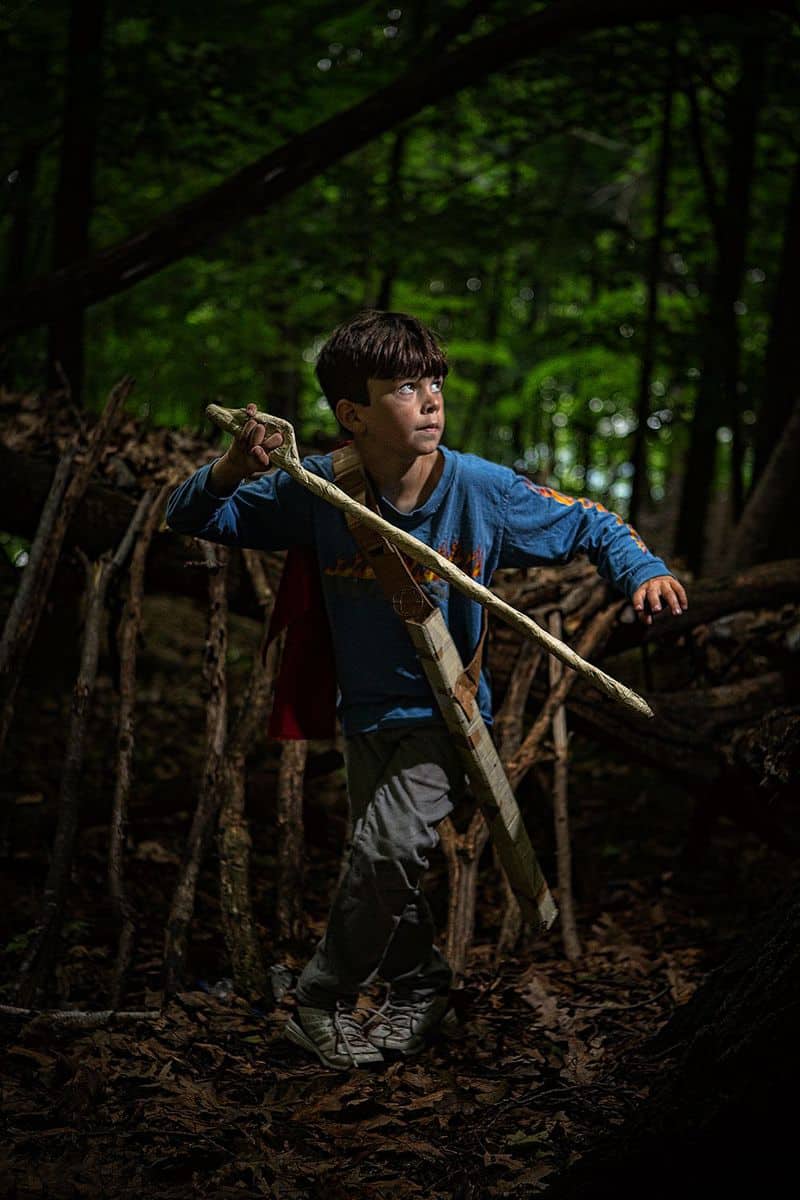 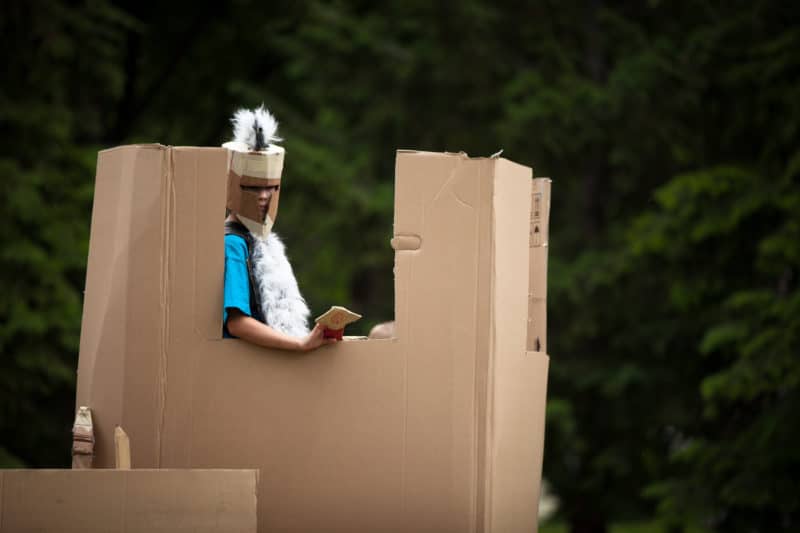 “The Road goes ever on and on,
Down from the door where it began.
Now far ahead the Road has gone
And I must follow if I can,
Pursuing it with eager feet,
Until it joins some larger way
Where many paths and errands meet.
And whither then? I cannot say.” ―B.B.

J.R.R. Tolkien, The Fellowship of the Ring 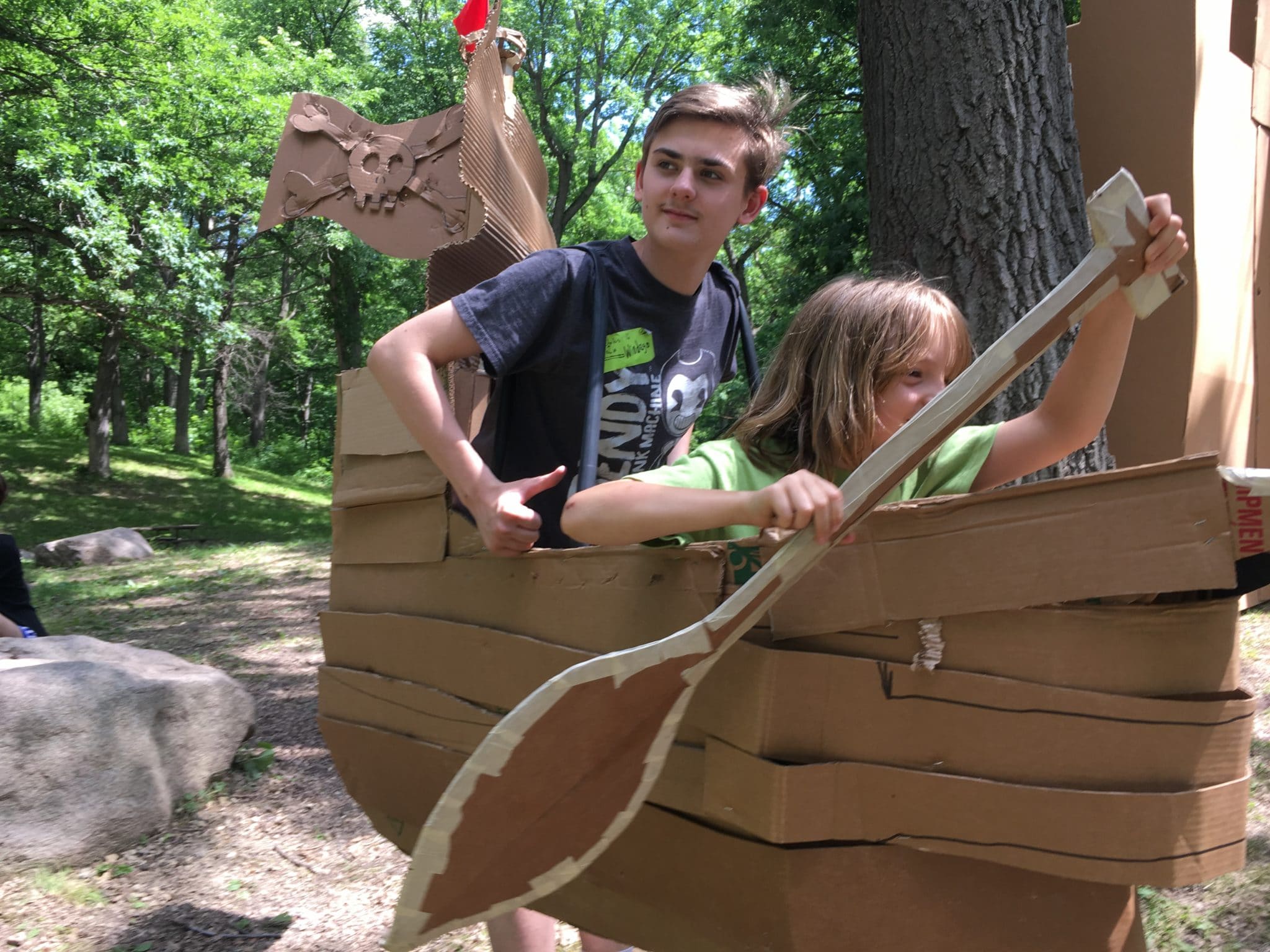